I’m a fool for full moons. And last night’s was no exception. It was not only full, but it was also a blue moon. The last one of its kind was in 2010 and the next one will be in 2016. Its name, though, isn’t indicative of its color; read more about why it’s called a blue moon here. I went with a friend to the jetties where we tried to capture this rare moon and I ended up with more than 150 photos. Whoops. Here are some of my faves in a gallery that progresses through the evening: from moonrise to its brightest point.

We arrived at the beach before the moon had started its journey rising.

But the clouds painted the sky in every shade of blue. 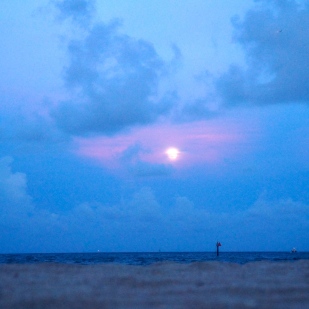 So we opened a Blue Moon beer, rightfully.

As the clouds dispersed, the full moon could be seen in its entirety. 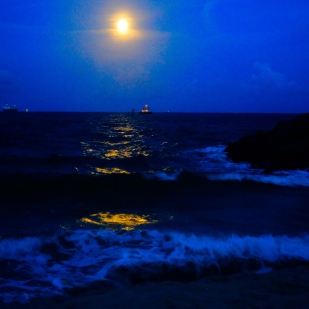 The evening progressed, the moon shining brighter, the sky melting colors and the tide crashing the waves harder. 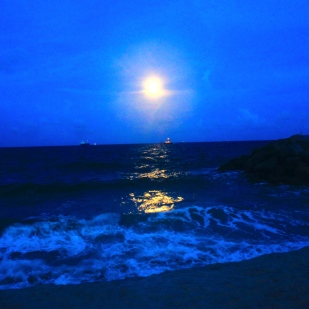 I put my camera on a tripod right around here, because I wasn’t shooting with a flash. 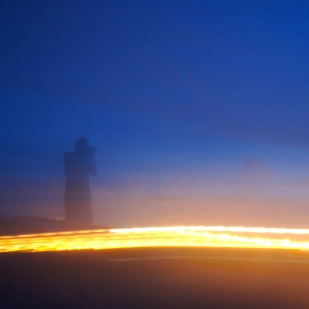 My shooting partner for the night… 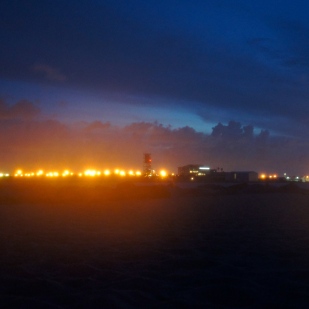 Turning toward the port, boats were leaving the harbor heading out to sea.

Planes buzzed the sky, spray painting lines with its exhaust.

We started getting blasted with sand and sprayed with salt water as the tide got stronger. And we were hungry, anyway, so we left the beach.

Remember, I didn’t have a flash or a tripod at this point. The moon was so bright at 9:45 p.m. that the canal seemed fully lit.

And went to a local seafood bar on the water to watch the rest of the moon’s show.

Please, feel free to share your own thoughts or comments: Cancel reply